The Gentle Art of Making Vegetarians

Posted on February 19, 2017 by AriBlackFiction 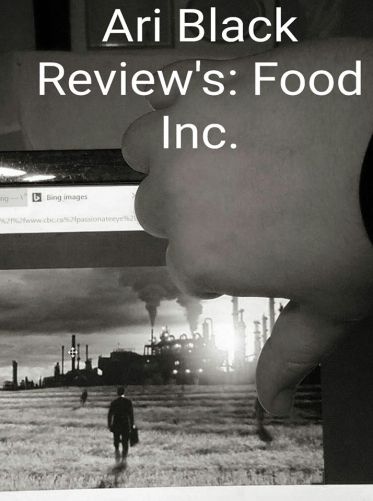 If you had the option of watching a documentary with accurate information, stunning visuals, and an honest look into the food industry or a documentary with aesthetics matching The Texas Chainsaw Massacre and accompanied by fire and brimstone preaching, which is more appealing? If you chose the previous category, then our views are alike; Food Inc. (2008) is more similar to the latter. Grotesque images of chickens trampling on fowl carcasses fill some scenes. Cows with permanent openings in their stomach, to remove bowel disruptions, because of indigestible corn feed are found in Food Inc. The documentary uses horror show visuals, and while these got the point across, the imagery is still repulsive and unnecessary.  Food Inc., directed by Robert Kenner, takes an inside look into the food industry and the dishonest tactics used by the food corporations. The film portrays how poorly factory farm animals, workers, competition, and consumers are treated. Also, it shows alternatives to the major corporations, different organizations concerned for consumer’s rights, and tells the audience to demand better from food companies. Food Inc.’s intentions are good but the film’s imagery and voice is as unethical as the food companies they are criticizing.

What the documentary does well is it makes the audience care about the farmers who are affected by big agribusiness; it gives farmers faces and names instead of being statistics. The greatest weakness of Food Inc. sometimes works to its advantage. Many people may not care to know who picked the apples you eat, or whose farm that hamburger came from but this film will make you think twice. Kenner uses emotional connections for the audience to see problems that small farmers deal with. Joel Salatin, farmer, is the best part of the film and the only thing genuine. A quote I liked from Joel said, “I think it’s one of the most important battles for consumers to fight: the right to know what’s in their food, and how it was grown.”[1] He understands the issues that consumers face because he considers himself to be just like everyone else. Joel’s speeches told me that he was not farming for money’s sake. Joel felt passion for everything that went into growing and producing agriculture. I would have preferred more scenes on similar subjects rather than the focus on dead livestock hanging from hooks.

The graphic imagery of Food Inc. only temporarily affects a person’s view. Because the Imagery is more dominant than facts in the documentary, viewers will go back to their normal routine as images fade. When presenting facts, Food Inc. captivates, but the focus on visual carnage is unforgivable. These Persuasion tactics only work short term when the focus is to shock viewers.  If Kenner had found a better way to include this information, his message would not have been as compromised. I cannot recommend this movie for it comes off as a demented after school special. There are other films that better present this information. The worst way to convince an audience is through Shock and Awe. I was definitely shocked but I was not awed.

I am an author of a number of poems and review posts. Eventually, I would love to write horror, Short Detective fiction and Graphic Novels. This blog is for you to view my reviews on a number of topics, horror, Classic film, book reviews. I hope you enjoy the posts as much as I love writing them. Thank You!
View all posts by AriBlackFiction →
This entry was posted in Food Documentary Reviews and tagged agribusiness, agriculture, documentary reviews, environmentally friendly, Food, food inc, joel salatin, movie reviews, reviews, Robert kenner. Bookmark the permalink.